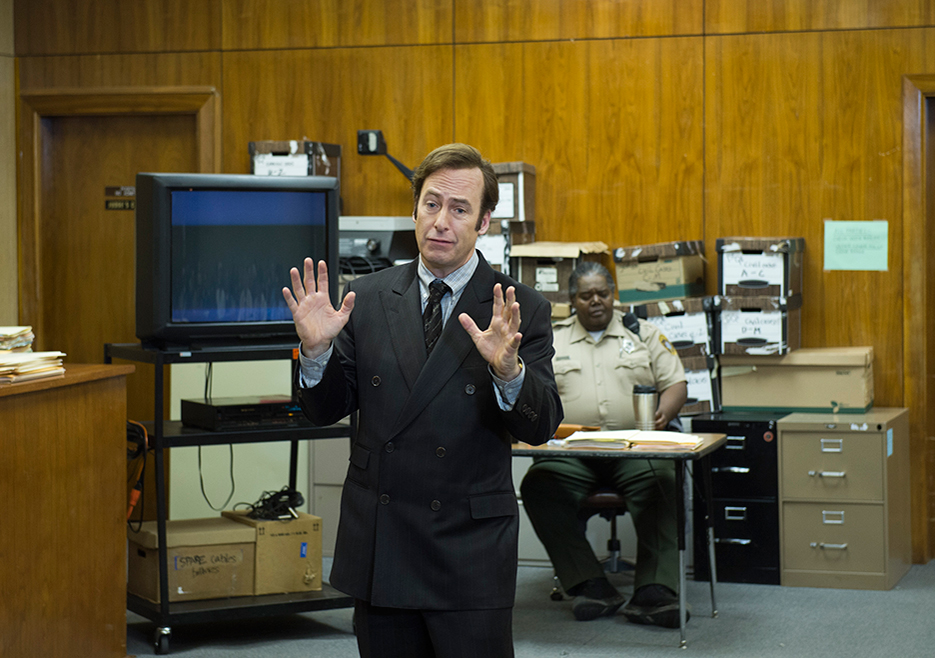 Where do we begin? A fair question to ask before watching the premier of Better Call Saul, the new prequel and spinoff series of the iconic Breaking Bad. The question is answered in the first scene with a rather unexpected scene for a prequel, we flash forward to what we assume is the present. We know of Vince Gilligan’s excellence from Breaking Bad so it is little surprise that we get some continuity right off the bat here. With Saul off to new adventures and a new life towards the end of his run in Breaking Bad, he proclaims he “would be lucky to work at a Cinnabon in Omaha”. Low and behold he is doing just that and if this is him being lucky, then I would sure hate to see him unlucky. The scene is entirely black and white and gets the point across well, that Saul has fallen quite the long way. It’ll be an interesting journey to see this fall from grace, that’s for sure.

We flash back to the past, and where the narrative really begins. Everyone’s favorite “criminal lawyer” is in an Albuquerque courtroom, something which we surprisingly didn’t see a whole lot of in the original series. He’s not a bigshot yet, we get lots of indication of that. He’s not even Saul yet, just James “Jimmy” McGill.  Jimmy works his days as an underpaid public defender, calls a boiler room in the back of a nail salon his office and drives a car so crappy that it gives Walt’s Aztek a run for its money.  It is far from a lavish lifestyle and we can see that very easily as he works his way into potentially a big embezzlement case for the Kettleman’s. We get some brilliant camera work of Jimmy staring oh so anxiously at the pen that could get him his big case but it ends in disappointment as the Kettleman’s decide to hold off on hiring him. He wanted this job so desperately, cases this big are few and far between for Jimmy and this near miss stings.

We get a big piece of family information about Jimmy in that he has a brother, Chuck. Chuck is also a lawyer, a partner of a big firm, Hamlin and McGill (HHM). His working status is up in the air but can be described as a very lengthy, maybe or maybe not permanent hiatus. Chuck seems to be super sensitive to electromagnetic fields and for all his worth, is living in the dark using lanterns, having his brother Jimmy bring groceries to store in a cooler, getting his news solely from newspapers and requires visitors to leave all electronics in his mailbox before entering. Jimmy, fearing Chuck’s financial situation and most definitely that of his own, wants HHM to buy Chuck out of his share of the firm, roughly in the ballpark of 17 million. Chuck isn’t so hot on the idea and insists he’ll be back any day now. Howard, one of the other partners sets up early to be an antagonist as he lowballs Chuck while he’s on hiatus and asks Jimmy through Chuck to stop using the name McGill in his career, even though it’s his name just as much as his brothers. It’ll be interesting to see how the dynamic between these three, in particular the McGill brothers works.

We do get some good old fashioned Saul antics later on in the episode as Jimmy, fed up that he lost the Kettleman case to HHM, tries to get one back on them by running a scam with some local scamming skater kids. Jimmy tells the kids and the audience about his days growing up in Cicero Illinois as Slipping Jimmy, and with the promise of two grand, the scam gets underway. The plan of intentionally skating into Betsy Kettleman’s car goes awry in the worst possible way as they run the scam on a similar looking car. The driver pulls a hit and run and the skaters follow in pursuit of the hit and runner, Jimmy not too far behind. The driver pulls into her house, an older Hispanic lady and leads the skaters into the house. We start the Breaking Bad callbacks with a bang as none other than Tuco Salamanca opens the door for Jimmy and brings him inside at gun point, setting up for an intriguing second episode.

It’s tough to definitively define the feel in a premier episode when a lot of set up and exposition are in order but Better Call Saul makes us feel familiar being back in Albuquerque while creating a different feel from its original show. Spinoffs often struggle to create their own identity, Better Call Saul will not suffer from this.

Breaking Bad favorite Mike Ehrmantraut is back! Mike is working a parking lot toll booth and does his job while unenthusiastic, well and rather humorous not allowing Jimmy to leave the court room lot until he gets the extra validation sticker, or pays three dollars. Hopefully we see more of him.

Quote of the day: Jimmy in response to the skaters trying to get him to hand over $500

“The only way that entire car is worth 500 dollars is if there is a 300 dollar hooker sitting in it.”

“Uno” shows us a new earlier side of a familiar setting in Albuquerque and sets the table for further exploration of Jimmy McGill and the people around him.