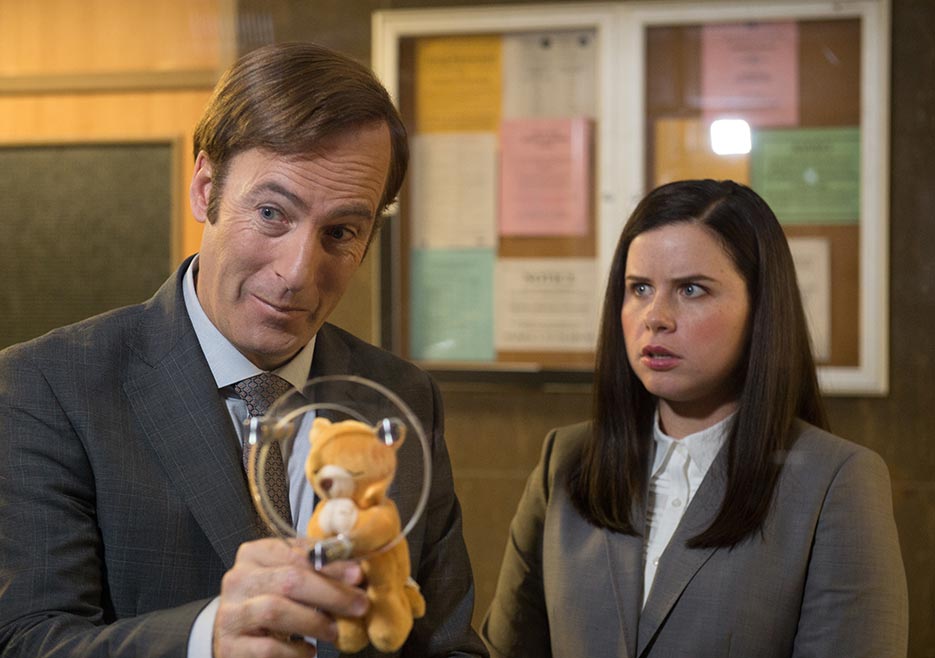 While “Rebecca” may lack an intense physical set piece like we saw in last week’s episode, “Gloves Off”, it shines in its own ways. Jimmy receives a dose of reality and perspective, Kim finally gets some well-deserved screen time, for the most part completely independent of Jimmy, and Mike runs into some unforeseen circumstances. And we’re off!

We start off with a flash to the past, from what I can tell it must be some of Jimmy’s first days or weeks in Albuquerque. Chuck, who is just fine with electricity at this point, and his wife (Who I correctly deduced was the Rebecca in question from Chuck’s sheet music in “Cobbler”) prepare to host Jimmy for dinner. Here we learn that Chuck’s disdain for Jimmy’s personality is not just because it’s incompatible with being a good and clean lawyer, in fact this takes place when Jimmy is still working the mail room. He warns his wife that his brother can be eccentric and not be to everyone’s liking. Chuck even prepares a safe gesture for either of them to use to signal to the other to come up with a reason to make Jimmy leave. Much to Chuck’s surprise, and probably disdain, Jimmy gets along extremely well with Rebecca. Jimmy’s lawyer jokes are a homerun and Chuck can’t stand to see his wife and Jimmy get along so he actually does the gesture to try and get him out. His wife either doesn’t see it or ignores it entirely and Chuck is not a happy camper. Chuck may be a great lawyer but he just doesn’t have the charisma that his brother does. He tries a lawyer joke himself and it falls completely flat. That ends the flashback and I have to say I really enjoyed it. “Rebecca” may be my favorite cold open that Better Call Saul has given us so far. Still no word as to why Rebecca isn’t seen in the present, I would have to assume divorce due to Chuck’s condition, or maybe their divorce caused his condition. Either way I look forward to any more family flashbacks such as this

I commented last time about how the fallout from Jimmy’s commercial fiasco didn’t really change much for Jimmy at the office. My comment must have been duly noted as that’s where we get started in the present. Jimmy assumes himself alone at the office late at night only for Erin, a lawyer who’s mostly been in the background if you’ve really been paying attention, has been assigned to babysit him. Cliff probably has good intentions and knows that Jimmy as of right now isn’t cut out to be a part of a team so he figures it probably for the best that he keeps an eye on him. Having any scout be on Jimmy would probably annoy Jimmy but one like Erin is worse than he ever possibly could have imagined. She plays everything extremely conservative. It reminds me a little of Chuck actually. Due to Chuck’s condition, he’s only able to yell at Jimmy afterward for how he’s doing things dishonorably and shaming the law. Not the case with Erin. Jimmy does as he does and Erin is there every step of the way to make sure he doesn’t and to stop him beforehand. Jimmy is the kind of guy who thinks that the ends will almost always justify the means. Cliff, through Erin is trying to show Jimmy that at Davis and Main, if you do not do it the right way, then the ends do not justify the means. For Jimmy its message received, albeit in a very obnoxious fashion.

An absolutely fascinating scene happens during the middle of the episode. Jimmy (and Erin) is down at the courthouse looking for some important paperwork. Jimmy escapes Erin’s wrath ever so temporarily by excusing himself to go to the bathroom. Here Jimmy runs into a familiar face, the lawyer that worked against him all those times during Jimmy’s season one public defense cases. Jimmy is apparently a big shot down at the public court now and the guy knew that Jimmy was working at Davis and Main before Jimmy even said anything about it. He is filled with envy and can’t decide between wanting to know how good Jimmy has it and not knowing so he won’t feel extra bad about himself. Jimmy may be having his own problems at work but this is still a top job. One that public defenders and other small time lawyers would be dying to have. It’s all a matter of perspective and Jimmy getting a scout on him because of something he did wrong at his new job at a big fancy law firm is a problem most other lawyers wish they could be dealing with. Whether Jimmy gains this sight of perspective remains to be seen.

Kim has been demoted a couple times now during the shows run and I am so glad to see that for the first time we see her struggle as her own. Jimmy does share one scene with Kim but it’s too propose that she sue HHM. That may be Jimmy’s style but it’s not Kim’s.  She’s going to get out of the doghouse through hard work and nothing else. She tells Jimmy this and the scene is all Kim. We see this hard work in abundance as we get two montages of her working every angle, calling every connection she has from her personal life or law school seeing if she can score a big time client to get her out of the dog house. She finds just that in the bank Mesa Verde. When she confirms that she’s got them she shouts out in pure joy and boy did she earn it. You just had to feel good watching that.

The joy turns to inner anger though, despite the fact that the consultation was a complete success and despite the fact Kim brought a 250 thousand dollar case to HHM, Howard coldly tells her she’s still down in document review. Howard had gotten some sympathy from me for having to take the role of an enemy to Jimmy for Chuck all these years but that’s genuinely a low blow. Kim did more than enough to exonerate herself of any wrongdoing (which is debatable at best anyway) from the commercial. Even Chuck agrees and tells her such after a rare Chuck and Kim scene in which Chuck unveils that their dad ran a business and that Jimmy would regularly take money from it until it went out of business. There’s an unexpected feeling of relatability there as they both can’t help but care and love for Jimmy but have to put up with his antics that not only do harm to himself, but harm the people around him. Chuck promises to talk to Howard to get her out of the doghouse and given Chuck’s power at the firm, I expect we’ll see Kim back at the office relatively soon.

Last but not least, we check in on Mike. Everyone’s favorite badass is back at work, sporting an ugly and slowly healing black eye. He’s put up his daughter in law and his granddaughter in a nice new place with the money that he more than earned for taking a beating. We wrap up the episode with Mike enjoying some down time at a diner where another Breaking Bad veteran makes their Better Call Saul debut. It’s Hector “Tio” Salamanca walking on his own two feet and he’s come to apologize for his nephew’s violent hot headedness. After an accepted apology, Hector reveals that he wants Tuco to serve a little less time and hopes to accomplish that by paying Mike five grand to say the gun on Tuco was actually his. He leaves the offer on the table and Mike ponders what he’s gotten himself into. Roll credits.

I don’t know if Jimmy is going to be around at Davis and Main for a long time or little time at all but something has to change. I just can’t imagine him putting up with Erin for an extended amount of time.

HHM has those cone shaped water cups. Among the worst designs for anything of all time.

Got to love having those time lapses of Albuquerque back.

Mike’s story continues to develop into a “meanwhile story”, one that just has so little to do with everyone else’s story. Jonathan Banks is carrying it well though and it’s great to watch it unfold. I did enjoy when Jimmy and Mike teamed up but that may have to hold off for a while as it looks like Mike’s story is going its own separate direction.

Joke of the Day:  How many lawyers does it take to change a lightbulb? Three, one to climb the ladder, one to shake the ladder and one to sue the ladder company!

Quote of the Day, Hector apologizing to Mike. “I’ll even twist Tuco’s ear, make him apologize.” Man would I love to watch that scene.

Kim works her way out of trouble, Jimmy suffers the consequences of getting in trouble and Mike ponders his next move in a great episode of Better Call Saul.