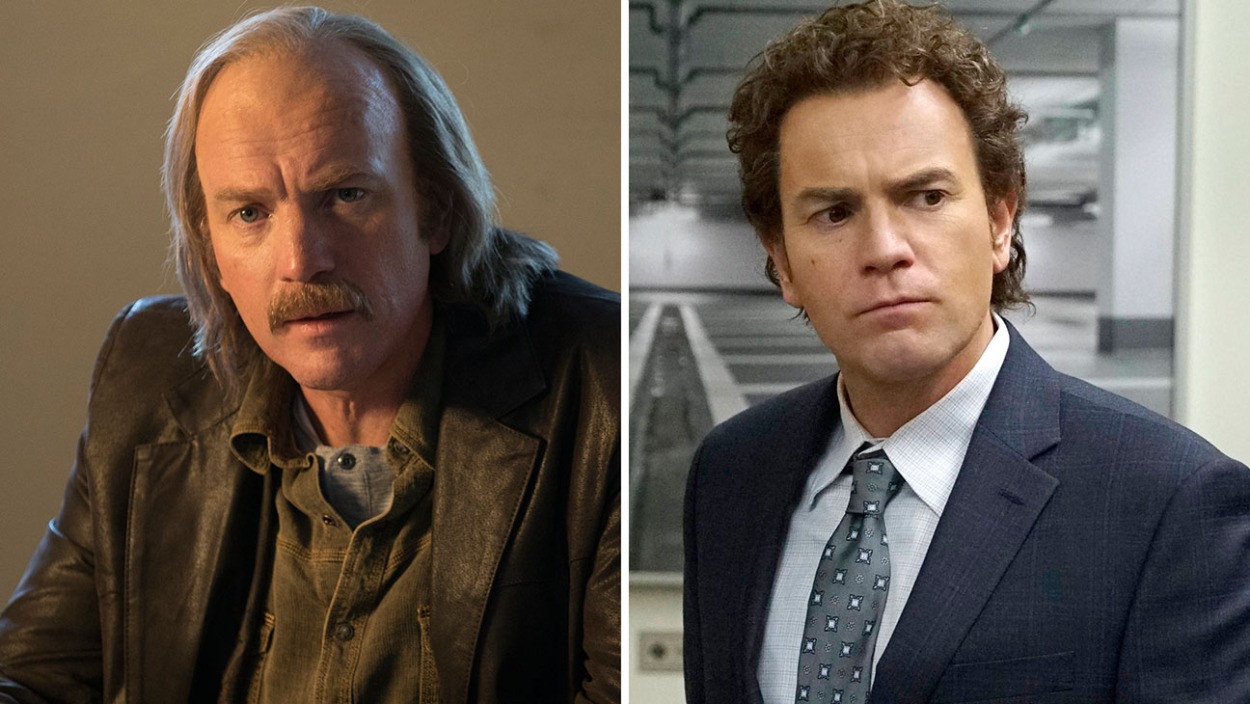 While I do not claim to know the slightest bit about the card game bridge, the episode’s namesake is a rule used in the popular game and while I’m not sure it has any relevance to the show in its literal sense, in a way this season of Fargo is vacant. Season one had the role of loosely following the critically acclaimed film, season two had a big tie in with season one bringing back Lou Solverson as the main cop, season three through albeit one episode, has had the liberty of going out on its own and has done just that. There’s plenty to talk about with “The Law of Vacant Places” so let’s get it rolling.

The opening scene is far away from our 2010 Minnesota setting, but it’s certainly an interesting one. We start in East Berlin, 1988. After an intriguing shot that gives us a look into a microphone, the camera pans out and we find ourselves in an interrogation room.  Jacob Ungerleider is in custody and being questioned over the murder of his girlfriend. A couple problems here, firstly, the man the official is looking for is named Yuri Gurka, and secondly, Jacob has a wife, not a girlfriend and his wife is alive and well as she was the one who answered the door in the first place. Jacob ties it down to a misunderstanding as they only just recently moved into the house so they must be looking for the old tenant. The official tells him they’re after the facts, not Jacob’s story. This leads to an interesting tie in to the narrative structure that I’m sure you’re familiar with if you’ve watched the first two seasons. “This is a true story” always welcomes us into an episode of Fargo and true is the first word to fade away until ultimately the last word standing is story. The thing is, we’re not the ones writing the show and Jacob isn’t in charge so neither of us are in a position of power to question the validity of the “truth”. Lies they may be, they become the true story when you’re in a position of power and the scene is a cool way of demonstrating it. Our opening scene stands alone as a clever one, but there is a tie in to be had with the rest of the episode if you look in the right place.

The casting of Fargo has always been a strength of the show and season three seems to be no exception. Ewan McGregor leads the way two fold actually, starring as fraternal twin brothers Ray and Emmitt Stussy. Seeing them on screen at the same time is impressive enough to watch but McGregor manages to give the two brothers slight differentiations, particularly in their speech which is no easy task given the difficulty of a Minnesotan accent. Ray is the more in depth character for now but the season is young and I’m sure we’ll get into more of Emmitt as we go along.

When we first meet the two brothers, it’s time of celebration. Emmitt is hosting a party at his house to celebrate his anniversary. A quick look at the house tells you Emmitt is a rather wealthy individual. Ray requests a meeting with his brother and we find out why. Emmitt ended up inheriting a very lucrative stamp collection from their father while down on his luck Ray ended up with a corvette that looks barely functional nowadays. With that stamp collection Emmitt was able to become the “Parking Lot King” of Minnesota while Ray is a parole officer who spends his days collecting piss from his assigned parolee’s for their drug tests. Ray is looking to get married to his girlfriend Nikki who is played by the wonderful Mary Elizabeth Winstead and goes to his brother to ask for some money to buy her a nice ring. We see this probably isn’t a new thing as it all comes across as like this is the thousandth time Ray has asked for money. Emmitt says no and says even if he wanted to, he couldn’t help him out right now.

Things aren’t all sunshine for our parking lot king as we find out they were running tight on money a few years back. He took out a loan to help cover expenses, or so he thought. We are introduced to the mysterious and flat out creepy V.M Vargas. Emmitt doesn’t get a whole lot of screen time in the first episode and Vargas gets even less of it but it’s pretty apparent to me that he’s filling the role of unsettling villain for the season. I’m sure we will get more details here but for now, Vargas tells Emmitt that he can’t pay Vargas back because they didn’t give him a loan, rather an investment. It seems as though Vargas is telling them that they will be involved in some money laundering and with whatever business Vargas is into, some sketchy stuff is going to go down here.

Back to Ray, while he is portrayed as down on his luck, a lot of that can be tracked back to the company you keep. His girlfriend Nikki who to her credit is actually very smart and quick on her feet, is an assigned parolee so the ethics there are kind of questionable. Ray’s next move after asking his brother for help crosses the line for sure and also goes back to the company he keeps. Ray uses a failed drug test as leverage over another parolee of his, Maurice. He asks Maurice to go over to Emmitt’s house in Eden Prairie to steal a stamp so he can buy Nikki a ring. Ray writes him down the address and he’s off.

Chances are when you work with ex-convicts, you’re not getting someone who can efficiently take care of “jobs”. We see this when the piece of paper with Emmitt’s address goes flying out the window and Maurice goes to look for it for all of five minutes before deciding he remembers enough details to get it right (the paper was no more than a hundred feet from the point he gave up). He convinces a gas station worker through violent means to let him take a phone book and drives over to the first “Stussy” he sees. Unfortunately for everyone, he mixes up Eden Valley and Eden Prairie and ends up killing our good cop’s, Gloria Burgle’s father. Not a great start to your crime, killing the father of the town police chief, you know?

Maurice goes over to Ray to tell him what he thinks is the good news but this ends up a fun to watch but bad scene for everyone. When he hands over the stamp, Ray realizes that it’s not the right one and that Maurice killed a stranger when he mixed up the addresses. Nikki is the one who commands the room here as Ray and Maurice at this point seem to be two fish out of water but she can only do so much as Maurice leaves the apartment threatening to reveal Ray’s part in the crime. Maurice never got to execute his plan as Nikki and Ray end up dropping an air conditioner from their high up apartment and gruesomely crush and kill Maurice. Nikki calls the cops playing the innocent bystander and tells Ray to get out as to avoid suspicion setting the season up for a story that can only go tragically wrong.

The direct link from the cold open if you didn’t catch it was the significance of addresses. Jacob is in trouble for moving in to a murderer’s house. Emmitt’s wife just so happened to live in Emmitt’s apartment before him and the big one, Maurice gets Emmitt’s address wrong setting the plot of the season in motion.

As I said before, I’m not a bridge player and I don’t think I ever will be, that montage of Nikki and Ray playing Bridge made it look mighty confusing.

When’s the last time you’ve seen a urine collecting montage? This was your first? Well I don’t blame you.

Quote of the day, after Maurice breaks into Nikki’s apartment and bathroom as she and Ray are taking a bath. Nikki “Ray, there’s a man in my bathroom.” Ray “Let’s not jump to any conclusions.” Nikki “Are you saying he’s not a man or that he’s not in my bathroom?” Nikki has him beat on both counts.

“The Law of Vacant Places” introduces us to our main cast and stays true to the Fargo formula, giving us a tragic error that has us craving the next part of this slow developing and amusing train wreck