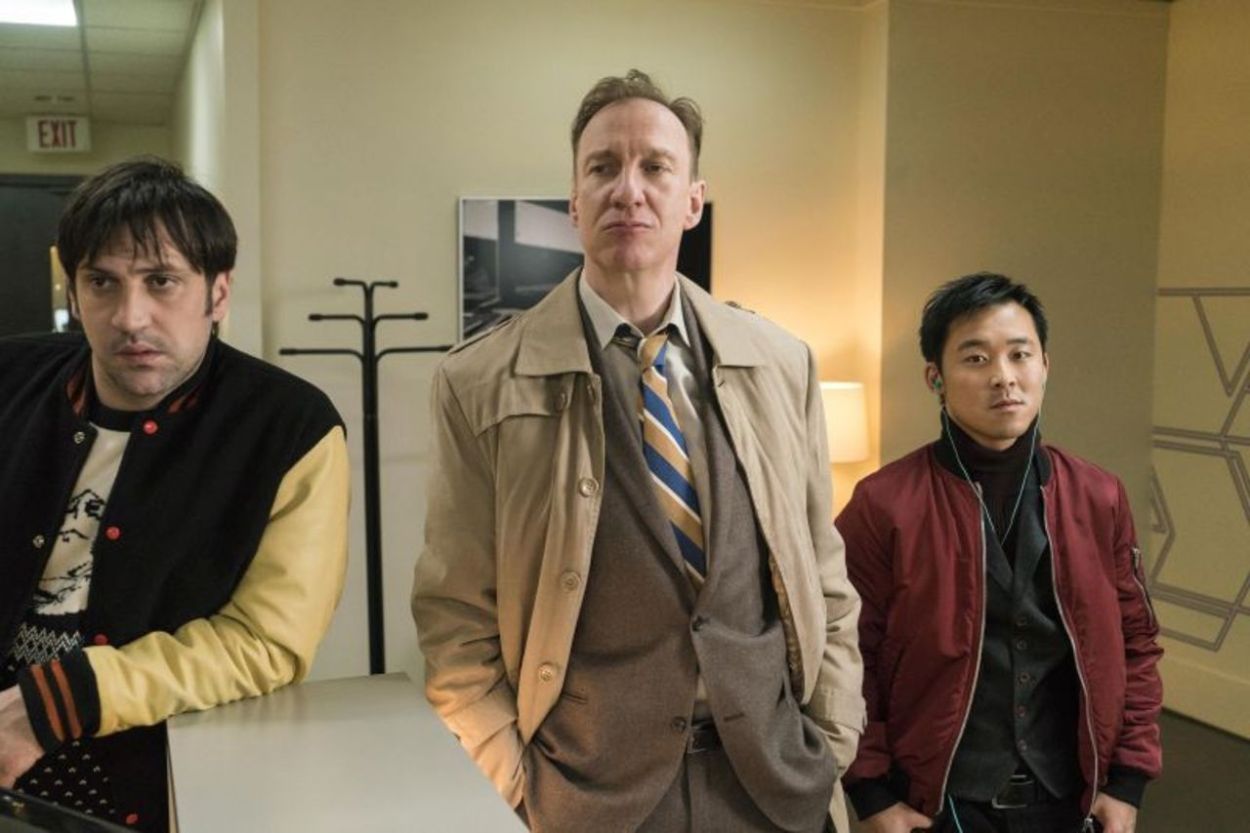 This episode, like the one before it, derives its name from a term from the card game bridge. As you may have guessed, one can use it to infer what the opposing player will do next by knowing what cards have already been played as their choices are now restricted. In this episode, many of the characters find themselves in restricting situations, Gloria’s time in charge is coming to an end, Nikki tells Ray that he really only has two choices in front of him and Varga forces Emmitt’s hand to the point that Emmitt actually has no choices. Let’s get into it.

The episode starts where the premiere ended, with a Gloria scene. With the death of her stepfather still recent, she continues her investigation into the life of Ennis Stussy, a man we really do not know a lot about. It seems the late Ennis was a writer back in his younger days as Gloria stumbled upon a chest full of books written by Ennis with the pen name “Thaddeus Mobley” and a newspaper announcing his success of winning an award. Before long, a coworker stops by to tell her the new chief wants the entire department (all two of them) to come by and get acquainted with the new situation. They are getting merged into the county police force as they are a very small force, two people, hardly a room to hold prisoners, and sharing space with the town library. On the way we see Gloria isn’t really a technology kind of person, her phone hardly picks up her voice, the automatic door doesn’t sense her for the second time in as many episodes, and the computers in the precinct are still in their boxes as she prefers to get work done the old fashioned way. The new chief, Moe, tells her that she’s living in the past and after some allotted grieving days, they will be having a long talk about modernizing the precinct. Not really feeling in the mood to continue getting lectured at, Gloria says she’s off to investigate the murder some more and takes off.

With that, Gloria heads on over to the gas station that Maurice got Ennis’ address from. After some rather not helpful information, including speculation that frozen orange juice from concentrate could be used to make meth, the gas station worker mentions that Maurice took a page out of a phone book. Gloria asks for it and cuts the chain off the book (because people used to steal phone books) and takes it in as evidence. That’s it for Gloria in this episode and while her bit of the story may feel the most unrelated, she hasn’t even gotten Maurice’s name yet. Her part of the story will get streamlined into the main plot before you know it.

I noted that last episode, Emmitt and Ray’s parts never really felt connected to each other and Ray was definitely more fleshed out through one episode. Emmitt evens up the score here screen time wise as he finds himself staring at a two front war. The battle between Varga’s expanding presence as a business partner, and the one he has to fight with his brother as Ray and Nikki up the stakes in the blood feud. Let us start with Varga.

We didn’t get a whole lot of Varga in the first episode, but it was enough for us to surmise (something that parking lot attendant struggled with) that he was up to no good. Luckily for us, David Thewlis as Varga, who is absolutely killing the role, gets a whole lot more screen time and we get much more insight into what he’s up to. It is confirmed that there will be money laundering and it appears they will be sharing office space as Varga and his employees take over a vacant wing at the Stussy headquarters. Varga has Emmitt trapped and ends the episode telling him just that. It’s a tough task to keep up with Varga and find out what it is that he’s up to so I don’t blame Emmitt for kind of ignoring that problem and focusing on his conflict with his brother. Even when Emmitt does try to get a glance into what Varga is up to, it doesn’t end well for Irv, the lawyer he gets to look into Varga. After clicking a sketchy link, Varga has a screenshot of Irv and not too long after, Varga’s henchmen, Yuri and Meemo dispose of Irv by throwing him off from the top floor of the garage. If that’s what’s going to happen when you try to stop Varga, it may be for the best if Emmitt doesn’t try to stop him. Varga mentions that he will be a billionaire by the time this is all over so it will be interesting to see how Emmitt decides to play the situation from here on out.

With the Varga situation proving tough to crack, Emmitt spends most of his time contemplating his relationship with his brother Ray. He begins to think that he’s been going too hard on his brother and maybe things would get better if he just gave him the stamp. His lawyer and friend, Sy, quickly talks him out of saying it’s not just about the stamp, if he gives in now, Ray will just want more and more and he is really envious of his life more so than the stamp. The fact that he did contemplate wanting to make up makes what happens next all the more tragic

Ray and Nikki, having covered up Maurice’s death well for the time being, get back to normal life, Nikki trying to secure a bridge sponsorship and Ray trying to make sure their crime in untraceable, law enforcement criminals don’t exactly get treated very well in jail. Nikki tells him that his chi is blocked up and the only way to unblock it and allow them to get back to seeking a happy and successful life is to make up with his brother, or get the stamp back.

They decide on the latter and head on over to Emmitt’s house. Ray’s job, pretend to make up with his brother while Nikki goes into the house and takes the stamp. The plan works well, too well though. Ray admits to Nikki that they actually did bury the hatchet and it felt good and that his chi was unblocked by making up with his brother. Unfortunately, that won’t last very long as Nikki did not find the stamp, a picture of a donkey was in its place. She did find a storage deposit receipt though and in frustration, uses “feminine hygiene as a weapon” and leaves.

It wasn’t too long before Emmitt found the evidence of the thwarted plan and any chance of the brothers actually being able to make up is now out the window. Sy then says that Emmitt has to cut Ray out of his life and he himself will go over and tell Ray. Sy keeps true to his word and heads on over to see Ray who is eating at a diner and what ensues is a vintage Fargo scene. Sy goes over trying to act the big tough guy to Ray and tell him what’s up but he doesn’t really have the demeanor to do it and it comes across all passive aggressive. After telling Ray that he will never be seeing his brother again, Ray gives Sy the finger as Sy walks away. Wanting to get the last laugh in, Sy takes his albatross of a car and rams in into Ray’s Corvette. Once again showing that this isn’t his thing, he accidentally damages a waitress’s car in the process and then just storms off. Something tells me that the Stussy brothers have not seen the last of each other just yet.

Technology definitely seems to be a theme for the season. Irv’s lack of computer awareness got him killed, Ennis seemed to be a prominent science fiction writer, and Gloria and technology just don’t seem to get along. I wonder where we’re going with this.

Emmitt hiding behind the glass to try and avoid Varga was hilarious. Varga isn’t going away anytime soon so perhaps Emmitt should rethink his strategy there.

A reminder that Minnesota is a simpler place. Gloria mentions that people don’t lock their doors at night. Emmitt is shocked that Ray would show up at 10:30 at night, he thought surely someone died if Ray came over that late.

Phrase of the Day: “Unfathomable Pinheadery”: Stupidity beyond belief. You see plenty of that in Fargo all right.

Quote of the Day, Too many to count. Some highlights include.

Irv to Emmitt “You borrowed a million dollars from a guy without knowing his name… I’m not asking a question, I’m just assessing the level of stupidity.”

Emmitt and Ray thinking about what’s in Varga’s truck

Emmitt “It could be anything booze, guns. You think maybe it’s, I don’t even wanna say it outloud.”

Emmitt “What? No, I was gonna say drugs.” Where in the hell did Sy get that from?

Varga’s plan starts to take shape, Gloria gains ground on the Ennis case, and the Stussy brotherly feud takes it to the next level as the third season of Fargo spreads its wings.