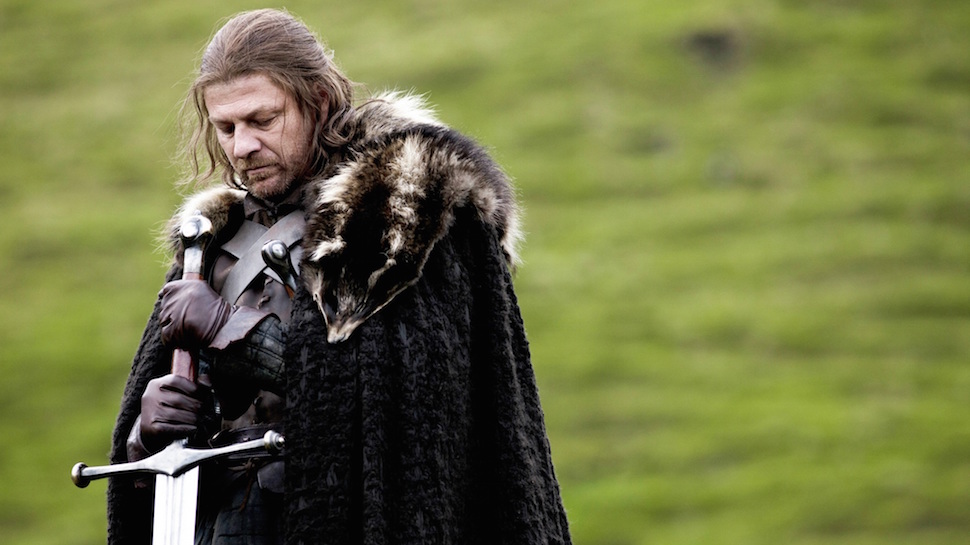 In anticipation of the upcoming seventh and penultimate season of the HBO mega hit series, Game of Thrones, I have started a re-watch and will be recapping and reviewing the episodes as I go. For those that don’t know, Game of Thrones is a  massive undertaking of a show that features a plethora of characters, probably featuring one of the largest casts one can find on a television show and several concurrent plot lines in different locations spanning two continents. It can prove to be a lot to keep up with, especially early on so these reviews may turn out to be more recap than review as there’s always going to be a lot to look at and the show doesn’t particularly hold your hand in that regard. With that out of the way, let’s take a look at the actual episode.

“Winter is Coming” starts us with three members of the Night’s Watch ranging north of the wall. The Night’s watch is a brotherhood of men  stationed at a massive wall who swear off sex, lands, their house name, politics, and swear their lives to protecting the Seven Kingdoms of Westeros from what is beyond the wall. For most of history, that usually entails not letting wildlings (people north of the wall) from coming in as they are viewed as brutes and savages. Will and two other brothers of the Nights Watch are looking for wildlings on their range but they get a lot more than they bargained for as they run into White Walkers, zombie like creatures who kill people and raise them as wights to be part of their army. Will’s brothers aren’t so lucky in this super rare encounter and lose their lives. Will, having seen enough decides to desert and flee from the Night’s Watch not wanting any part of having to see those guys again.

After the cold open, we are shown Winterfell, the capital of the North, one of the regions of the seven kingdoms. Here is the home of Lord Eddard “Ned” Stark and his five children, heir to be Robb, a queen in the making in daughter Sansa, another daughter Arya who is not so ladylike, and two younger sons named Bran and Rickon, the latter of the two not being that important. He also has with him a ward named Theon and a bastard, Jon Snow, who his half siblings treat like a true born sibling while Ned’s wife, Cat, detests him.

The siblings are sharing some family bonding time when Ned receives notice of a Nights Walk deserter being spotted and captured. He gathers his boys and rides off to go do his duty. Deserting the Night’s Watch is an action punishable by death. Our unlucky defector turns out to be Will and with his lasts words he cautions Ned about the White Walkers and tells him that people have to know. Ned’s not buying it as the White Walkers have been dead for thousands of years and dismisses it as a crazy man’s last words. And that turns out to be all she wrote for Will as Ned ends Will’s life himself with his massive blade, Ice.

On the way home, they run into a dead direwolf (a much larger real life wolf) and her five puppies. Ned decides the humane thing to do is to kill them rather than leavings the pups to fend for themselves but Jon points out that there is one for each of his kids and that the direwolf is his house sigil after all. Ned gives in and lets them keep them and we find out there’s actually six of them! The lucky sixth is the runt of the group and albino. A perfect match for Jon so he takes him as his own.

Upon their return to Winterfell, Cat goes to tell her husband some bad news. Jon Arryn, a father figure to Ned has passed away. He was serving as Hand of the King (the top assistant and right hand man to the king) to Robert Baratheon. With Ned and King Robert being very close friends and the position of Hand being vacant, Robert is riding to Winterfell, thousands of miles from the Capital of the Seven Kingdoms in King’s Landing. He brings with him the Queen Cersei Lannister and her two brothers, twin brother and legendary swordsman Jaime, and her clever drinking and whoring dwarf younger brother Tyrion, commonly known as the Imp.

The offer is a life changing one and might not be super enticing to the Lord of Winterfell who’s been isolated from all of the southern politics so when Robert formally offers him the position, he sweetens the deal with a marriage offer. His son and heir to the throne Joffrey will wed Ned’s eldest daughter, Sansa and be Queen one day. Getting more enticing.

While Ned mulls over the offer, the Stark’s prepare a feast for the arrival of the royal family.  Robert whores around and drinks are plentiful for the town wide feast so most everyone is having fun. Jon however, is outside taking some anger out on a practice target. He wasn’t allowed in as Cat thought it would disrespect the royal family to be seated in the presence of a bastard. Tyrion Lannister joins him for a time and shares some good advice with him. He too is shunned a lot given his diminutive status and he tells Jon to never forget who he is because no one will ever let you forget it. If you own it, wear it like armor, it can never be used to hurt you. Jon’s struggled with this his whole life and its apparent by his eagerness to want to join his Uncle Benjen as a member of the Night’s Watch. Whatever he does, he would probably do good to listen to Tyrion’s advice.

After the festivities, Ned and Cat are getting ready for bed when an important letter arrives from Cat’s sister. She was married to Jon Arryn and claims that he didn’t die from sickness, he was murdered by the Lannisters. Cat tries to use this to get Ned to say but if this is true, Ned can’t leave his friend all by himself with the threat of death should he do something wrong. To Cat’s dismay, this finalizes his decision, Ned will accept the position of Hand of the King and will be moving to King’s Landing.

For many shows, this amount of story would be ambitious enough but Game of Thrones isn’t stopping there. In Essos, the continent across the Narrow Sea from Westeros,  a threat emerges. Robert actually took the crown from a man known as Aerys Targaryen. Aerys’ two children fled to Essos and Viserys, the older of the two is getting ready to make his move. He is using his sister Daenerys as a chip, wedding her to a brute of a man by the name of Khal Drogo, leader of a vicious nomadic tribe known as the Dothraki. Her hand in marriage buys Viserys Drogo’s military support when the time is right. Viserys isn’t the nicest guy and he is hellbent on getting back the iron throne. When his sister voices her displeasure at the marriage, he remarks that he would let Drogo’s whole tribe and their horses fuck her if it meant winning back the throne.

After that uncomfortable moment, we flash forward to the wedding itself which much like the Dothraki people themselves, is a barbaric spectacle. Dany does get some interesting wedding gifts though. Some books from back home from a knight, Ser Jorah Mormont. Secondly,  three dragon eggs which we are told won’t be hatching any time soon as the long times have ended that possibility, but they look nice nonetheless.  Lastly, Drogo’s gift is a beautiful white stallion. Not much time to admire it though as Drogo quickly takes her off to consummate the marriage. It proves to be an uncomfortable scene but you get the feeling Dany will toughen up because for the time being, Drogo’s not going anywhere.

It’s mentioned and shown earlier in the episode that Bran enjoys climbing, much to his mother’s dismay. He promises to stop but he’s just a ten year old kid so you know he’s not going to keep his word. Our end scene for “Winter is Coming” shows Bran climbing the walls of Winterfell and he just so happens to pick the wrong place at the wrong time. Upon climbing into an open window he encounters Jaime and Cersei (yes the twin siblings) having sex. Obviously this knowledge going public would be disastrous for the two so Jaime goes assertive and pushes Bran out the window! A ten year old kid and it’s a long way down. In a show that had no choice but to introduce a lot of information in a short amount of time, this was a great way to end the episode as cliff hanging moments aren’t plentiful in the early stages of the show.

As I’ve stated, Game of Thrones can prove to be quite an adventure to keep up with the first time around. I highly recommend watching the show with captions. Also keep an eye out of the pop up book-esque moving map during the theme song. The map changes by episode to show relevant locations and it gives you a bearing on where these places are in relation to each other. We only got four places on our map in this episode, it will get much higher as we go along.

There was a lot to get out of the way so here’s some actual review content for ya. The locations are all gorgeous, the cinematography is great and its clear to tell the production value behind the show is tremendously high. Limited roll call today and limited action for the starring cast members that did appear but you’ll see this ensemble cast is loaded with great actors and great performances.

Quote of the Day comes from Illyrio, the man who has been watching over the Targaryen siblings. “A Dothraki wedding without at least three deaths is considered a dull affair”.  Not like the weddings we’re used to huh?

“Winter is Coming” introduces a lot of the main cast and does groundwork to get us ready for some moving plot lines going forward.