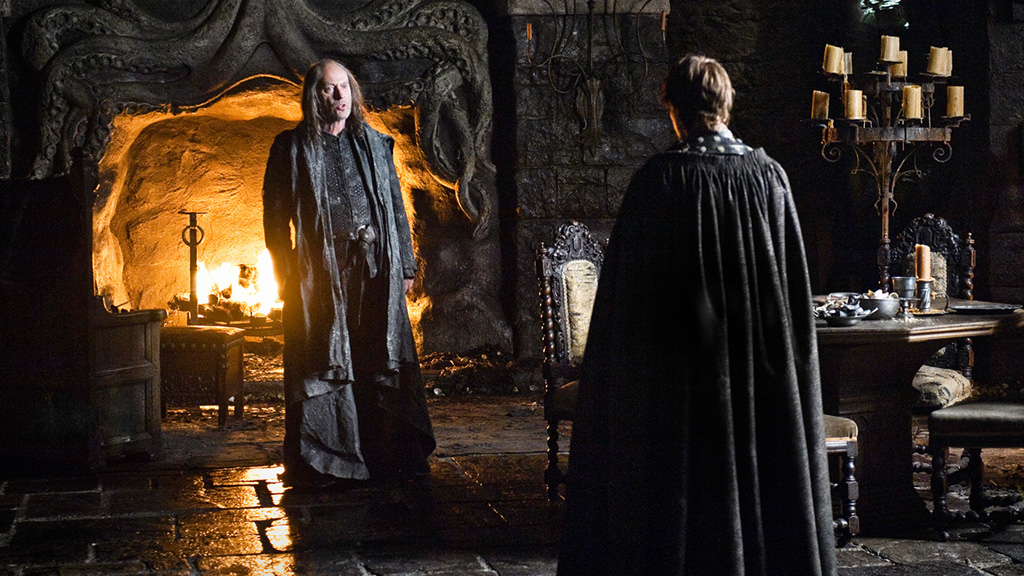 In the season two premier “The North Remembers”, the show took time to examine almost every important character to see what they were doing after the long layoff between seasons. “The Night Lands” takes a different approach however, only taking us around to a handful of places for any significant time but using the extra screen time to develop the focused plot lines. In “The Night Lands”, Arya confides some confidential information to a new friend, Davos makes a pitch to an old friend, Jon breaks the rules, and Tyrion adjusts to his new role in King’s Landing. And we’re ready.

“The North Remembers” left us with a horrifying order and execution of all of King Robert’s bastards. The order is carried out to near completion save for one bastard, Gendry. “The Night Lands” starts us off right where “The North Remembers left us”. We find ourselves with Arya and the rest of the group heading up towards the wall. After relieving herself, Arya heads back into the group and runs into the caged men that we’ve seen a couple times already. In the caravan there are two brutes, and a rather odd fellow named Jaqen H’Ghar who refers to himself as “a man” and Arya as “a boy”. That’s probably going somewhere but for right now, that’s all we get.

Two City guards have made the trek from Kings Landing and have caught up with the group heading to the wall. Arya tells Gendry that they’re looking for her and they should hide. She’s wrong in this case though, they’re after Gendry but Yoren sends the two guards back home in a cool scene telling them that these boys are free from any king’s orders as future men of the Night’s Watch. The guards yell out that they’re looking for Gendry in a last ditch effort to see if anyone will hand him over for a reward. When that plan proves fruitless, they head back to King’s Landing, promising Yoren that they’ll be back with more guards next time.

After the danger passes, Gendry asks why Arya she thought they were coming for her. He was sure they were coming for him as the last two hands of the king (Ned Stark and Jon Arryn) both came to ask him questions and both found themselves dead shortly thereafter. Gendry figures out on his own that Arya is actually a girl but he has no idea that she’s a noble lady, Arya reveals that she’s a Stark on her own. She makes Gendry promise not to tell anyone else and Gendry gives her his word. With the cat out of the bag and the fact they’re still nowhere near the wall, these two just might become friends as they continue their journey northward.

Over at Dragonstone, Stannis has taken to religion to help on the upcoming attack of King’s Landing while Davos has taken a different approach. As a former smuggler, Davos has connections in the business and one of these connections is his old pirate friend Salladhor Saan. Salladhor is a very powerful and influential pirate, an owner of thirty ships. Davos convinces Salladhor to bring his ships to Stannis’ fleet on the upcoming attack of King’s Landing on the promise of gold up front and all the loot he wants once they take the capital. Salladhor also has the ambition of wanting to “fuck the queen”. Davos can’t guarantee him that but the first two promises are enough to convince Salladhor to join Stannis for the battle. Good job Davos.

All the way up at Craster’s Keep, the Night’s Watch is taking a day or two to enjoy shelter as there’s no guarantee of there being any more shelter anytime soon. While Sam is preparing dinner, Jon’s direwolf Ghost scares one of Craster’s wives, Gilly. Sam comes to the rescue (how often can you say that?) and tells Ghost to shoo off. This is probably the most impressed a girl has ever been impressed by Sam so Sam takes the opportunity to have a conversation with Gilly and he learns a little bit about her. Gilly is pregnant and wants to leave, fearing what will happen to her child if it turns out to be a boy.

Sam decides that he has to help Gilly and brings her over to Jon to ask if they can take her with them. Jon runs through the many reasons why this plan is ridiculous, Craster said don’t touch or even look at one of his wives, they’re going north and not south back to the wall, no one can deliver a baby, and Mormont won’t allow them to bring a girl with them. Gilly pleads, saying that she’s scared of the consequences of having a boy. Jon asks what will happen if she has a son but she doesn’t answer.

Later that night, Jon finds out firsthand just what it is that happens to Craster’s sons. One of his many wives has given birth to a son and Craster goes out with the baby deep into the woods. Jon sneaks behind him to find out what’s happening. Jon is shocked to see Craster just drop the baby boy off in the woods and even more shocked to see a White Walker take Craster’s son away. It turns out Jon isn’t quite as sneaky as he thinks he is as Craster finds out that he was following him and hits Jon in the head, knocking him out.

Theon Greyjoy arrives back at the Iron Islands and is a bit disappointed at the reception. He was expecting a grand welcome home but arrives to find that no one is there waiting for him. His sister Yara offers to bring him up to Pyke, without revealing that she is his sister. They make their way to Pyke and Theon sees his father for the first time in nearly a decade, Balon Greyjoy. Theon’s reception here again, goes poorly. Theon’s been a Stark ward for longer than Balon had him and he’s angry about it. He tells his son that he’s become a northerner and has forgot what it means to be ironborn. After those rather unpleasant pleasantries, Theon tells Balon of Robb’s proposal, bring his ships to Robb’s cause and Robb will make him king of the Iron Islands. Balon tosses the letter in the fire and says that no man will give him his crown, he will pay the iron price (taking it yourself through force) for it. Theon tells his father that he has no shot against the Lannisters. Balon replies that he’s not attacking the Lannisters, implying that he’s going to attack the Starks. What’s Theon going to do, side with his sworn brother in Robb, or stay loyal to his family and join them in an attack of the north?

Last but not least, we turn our attention to King’s Landing where a fair share of the screen time is dedicated to. Tyrion walks into his chamber and finds Shae as expected but also finds Varys, which was totally not expected. After Shae and Varys share their pleasantries, Varys tells Tyrion that they are needed for a meeting of the small council, not before a fascinating war of words between the two. Varys threatens to reveal Shae’s presence while Tyrion notes that Varys would end up in the water if he did such a thing. While Ned was easy to play with due to his inability to put honor aside, Tyrion has no such problem and people are going to have to tread lightly around him or face the consequences.

At the small council meeting, Cersei and the rest of the council discuss some issues. Cersei and Tyrion’s cousin has arrived bringing the terms of Robb Stark for peace and Cersei predictably rejects them all while Tyrion says they should at least send Ned Stark’s remains out of respect. The last matter of the day is a letter from King’s Landing, pleading for more men to man the wall with the incoming threat of wights and white walkers. Everyone is skeptical except for Tyrion. Interesting to note that Tyrion was making fun of the belief that mythical creatures existed before his visit to the wall but he earned a great deal of respect for Mormont and with Mormont’s signature on the letter, he finds it hard to believe he would lie about such a thing. Cersei doesn’t want to send men up there as they have their own war to deal with at home but we are again reminded, political games mean little when an army of the undead is heading your way.

After hearing of the mass killing of Robert’s bastards, Tyrion is very upset at the cruelty of the act and decides to take matters into his own hands. He invites the commander of the city watch and the man in charge of completing the killings, Janos Slynt. Tyrion calls him out for his lack of humanity for completing the order and notes that he betrayed the last hand of the king. That is more than enough evidence for Tyrion that Janos is not to be trusted and mere days after Cersei made Janos a lord, Tyrion revokes it by sending him to the wall. Tyrion completes his move by appointing Bronn as the new commander of the city watch. Tyrion’s off to a great start in King’s Landing.

Afterward Tyrion confronts his sister about the order and learns that Cersei didn’t order it herself, rather it was Joffrey. Tyrion warns Cersei that there’s no way that they are going to win the war if their own people despise them. The order was done all in public and makes Cersei look all the more guilty of incest. After all, if Joffrey is a bastard of Jaime, who would he want to kill? The bastards of Robert as they actually have a better claim to the throne than he does. Tyrion cracks a joke about Cersei’s relationship with Jaime and she responds saying that Tyrion has always been funny but no joke can top his first one, killing their mother so he could be born safe. There’s certainly no love lost between these two siblings, that’s for sure.

Another check in on Dany. Things are as brief as they were last week, but the situation gets worse. One of Dany’s horses came back, with the rider’s decapitated head in a bag. Something good has to be coming soon for Dany, right?

Yara deciding not to disclose to Theon that she is his sister must have made Theon feel real gross afterward, realizing that he was feeling up his sister on the way up to Pyke.

The Night’s Watch man telling the hilarious story about his mother farting on her death bed is Eddison Tollett, otherwise known as Dolorous Edd. He earned that nickname through his hilarious pessimistic sense of humor. It’s always a fun time when he’s on screen.

Melisandre seduced Stannis on the pretext that she could give him a son, something his wife has never given him. What good a son will do in an imminent battle, your guess is as good as mine.

Quote of the day comes from Tyrion, roasting Janos Slynt. “I’m not questioning your honor, Lord Slynt. I’m denying its existence”. Tyrion is on a roll.

“The Night Lands” sees Tyrion flourish in his new role while Jon takes action and Theon ponders his next move.