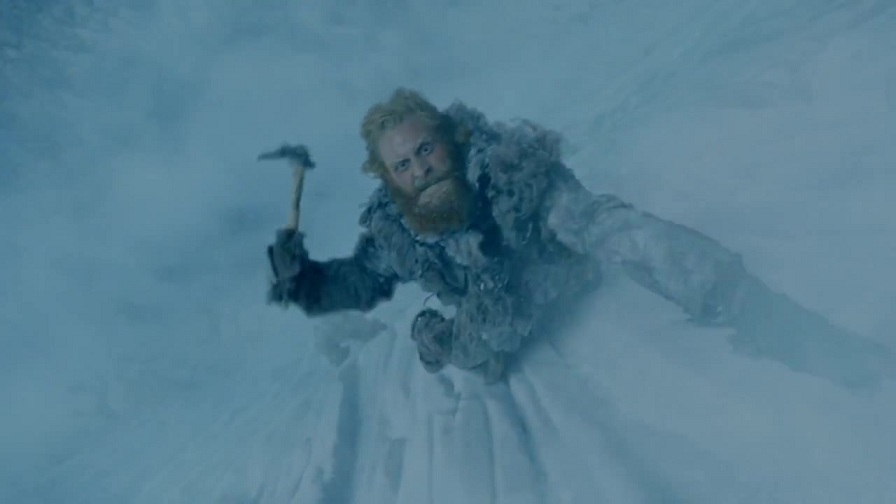 Game of Thrones S3E6 “The Climb”

With an episode name like “The Climb”, it shouldn’t come as a huge surprise that nothing earth shattering happens in this sixth episode of the third season of Game of Thrones. A lot of the plot lines explored in this episode are rather fittingly about travel. Getting from A to B, seeing if it’s possible to go from A to B and being given a new and unexpected destination are all things that can be found in “The Climb”. There’s plenty to discuss including Tywin getting his way, Arya not getting her way, Edmure getting dragged into nephew Robb’s negotiations, and Jon, Ygritte, Tormund, and the rest of the free folk group scaling the wall. Let’s get it rolling.

Tywin’s plan of marrying his daughter to Ser Loras Tyrell didn’t exactly meet enthusiasm from his daughter, Cersei. Tywin meets a similar negative reception when he asks Olena Tyrell for her consent to the marriage, in a verbal clash between two people that we’ve all secretly been dying to see. Olena and Tywin throw shade at each other for their children’s (grandchildren for Olena) actions including incest for Tywin’s and homosexuality for Olena’s. Tywin tries his best to reason with Olena but she doesn’t want to budge. Tywin brings out the big guns and tells Olena that if she doesn’t consent, he’ll draw up an order to name Loras to the kingsguard, where he would have to renounce his claim as heir of Highgarden. At the threat of this, Olena relents and gives her consent to the marriage. Here’s hoping there’s more scenes later on with these two, it was a joy to watch.

Meanwhile, Cersei and Tyrion are in Cersei’s chambers, looking down at the gardens where Loras and Sansa are talking. Tyrion sarcastically asks which of the four of them is the biggest loser of Tywin’s plans and then changes the subject to something that’s been on his mind for quite a while. He tells Cersei of his belief that she sent Ser Mandon to kill him at the Battle of the Blackwater. Very quickly thereafter, Tyrion realizes that Joffrey was the only one who had the power and was stupid enough to put such a public hit on him. Tyrion asks his sister if he’s in any danger now but Cersei assures her brother that Joffrey won’t do anything dumb with Tywin in town now.

With that truth found out, Tyrion turns his attention to unveiling a truth. He figures it’s best that Sansa hears about the new wedding arrangements from her husband to be so he heads over to Sansa’s chambers to do just that. He finds Shae there as well and he very cleverly tries to get her to leave without coming out and saying it outright but it doesn’t seem to work. Tyrion figures it’d be much better to talk about this to Shae in private but he has no choice but to just come out with it with both his lover and his wife to be in the room at the same time. “Well this is awkward” Tyrion starts off with, no kidding man.

Sometime later, Varys finds Littlefinger in the throne room and they discuss the history and legacies that make the iron throne and the realm in general, what they are today. Littlefinger reminds you of his villainy here when he reveals two things. The first one is that he found out that Varys had recruited Ros to spy on him and when he found out, he gave her to Joffrey who proceeded to brutally kill her with that shiny new crossbow of his. Secondly, Littlefinger gives a nifty little speech about chaos. He says that most people see chaos as a pit, where the only way to go is down, but this is wrong. The pit is only an illusion that weak people tell themselves so they won’t feel bad about not climbing the ladder, which is what chaos really is. Littlefinger creates and revels in chaos, because he sees the ladder and isn’t afraid to climb it to grab more power for himself. It turns out Varys was right a few episodes ago. Littlefinger would burn the country down to become king of the ashes. By the end of the episode, Littlefinger has already departed for the Vale and once he marries Lysa Arryn, he will have control of the Vale, which probably has the largest army remaining in the country due to its neutrality in the war. Littlefinger just keeps on climbing that ladder.

Up in the Riverlands, Arya is receiving some archery lessons when she spots a group of Baratheon soldiers in the distance. The brotherhood approaches them and  it turns out that the Baratheon men are accompanying and protecting Melisandre. She tells Thoros that the lord of light is in need of someone they have and he directs her to Beric back in the cave hideout. After sharing her surprise that Thoros has the ability to bring Beric back from the dead, she turns her attention to business and offers Beric a large amount of gold for this person of interest.

Bad news for Gendry because he is the person that Melisandre is looking for. Arya is outraged when she sees that the Brotherhood is selling someone who believes in their cause for a few bags of gold and decides to confront Melisandre. After Arya calls her a witch, Melisandre turns around and mysteriously tells Arya that she will kill many people in the future and that they will meet each other again. With that, the Baratheon men tie up Gendry and they depart from the Brotherhood, likely back to Dragonstone.

To the capital of the Riverlands we go, Riverrun, where we find Robb with his group of advisers, negotiating with Walder Frey’s children over the potential alliance between the two houses. Walder is obviously very upset so he’s got quite the list of demands that need to be met to go through with this alliance. He requires a formal apology from Robb for his oathbreaking, that one’s fair enough. Walder also wants Harrenhal given to him, a bit harder since that’s in the south but Robb agrees to it. Lastly, Walder wants Edmure, the new lord of Riverrun, to marry his daughter, Roslin. Edmure isn’t too excited about that last term and Robb and the rest of the group has to convince him to go through with it. After some conversation, Edmure decides to consent to the marriage and the alliance is back on. One last thing though, Walder is skeptical about long term scheduled marriages, (and rightly so I say) so the marriage must be held within the next fortnight. The passage of time can be a bit confusing at times in the show but a fortnight isn’t very long, this wedding will almost assuredly take place this season.

At Harrenhal, Roose Bolton comes to a decision in regards to what to do with Jaime Lannister. Roose tells Jaime over dinner that he will grant him passage to the capital if he promises to tell Tywin that he had nothing to do with the missing hand. Jaime toasts with Brienne for their continued travels but is disappointed to find out that their time together is at its end. Roose is detaining Brienne for abetting treason. Jaime and Brienne were a great duo so it’s a sad day if this is really it for their adventures.

Somewhere in the North, Theon takes part in a game that doesn’t sound quite fun at all. The boy wakes Theon up with that horn that Theon just loves so much and tells him that they’re going to play a game. The boy threatens to cut Theon’s little finger off. Theon wins the game if he can correctly guess the boy’s identity, where they are and why he is being tortured. The boy wins the game if he can make Theon beg him to cut off his finger. After a few wrong guesses which each result in the boy flaying a piece of Theon’s finger off, Theon seems to win the game by guessing that the boy is a Karstark, they are in Karhold, and that he is being tortured as punishment for betraying Robb Stark. The boy reveals his sadism by saying that he lied about Theon being right and that he’s only torturing him because he enjoys it. He then goes back to flaying the finger some more and wins the game as Theon begs him to cut the finger off. Theon was a villain in season two but it’s definitely getting harder and harder not to feel sorry for him, these scenes are tough to watch.

Beyond the wall (barely), the wildlings prepare to climb the wall. While getting the proper gear on, Ygritte reveals to Jon that she knows Jon is still loyal to the watch. She promises to keep it a secret but tells him that his most important loyalty is to her and her most important loyalty is to him. She asks Jon to never betray her and Jon promises that he won’t. With that out of the way, the group starts their climb. While the climb makes for amazing visuals, there’s not much to actually talk about. Tormund, Orell, Ygritte, and Jon are one group on a safety rope from top to bottom. Ygritte accidentally causes an avalanche and Orell decides that Tormund won’t be able to keep climbing with the weight of everyone on the safety rope. Orell then cuts the rope, seemingly sending Jon and Ygritte to their doom. Jon is able to swing over to a ledge just in time to save himself and is able to pull Ygritte up after she falls underneath him. They finish the climb and Ygritte is finally able to take in the absolute gorgeous views of both north and south of the wall. She and Jon share a passionate kiss as we end the episode. We don’t know for sure where Jon’s loyalties will lie by season’s end but his love for Ygritte is real, will it be enough to make him a free folk, or will he stay loyal to the night’s watch? Now that they’re on the south side of the wall, it’s only a matter of time before those questions have to be answered.

Sam and Gilly are making their way to the wall. Sam shows Gilly (and reminds the viewer) that he has the dragon glass weapons back from the Fist of the First Men. What does dragon glass do? Sam’s not quite sure but I reckon it must do something or they wouldn’t bother to remind us that Sam still had it.

Sansa is not taking the new wedding plans very well. She is seen sobbing by the docks as Littlefinger’s ship has set sailed. She had two escape plans, marry Loras or leave with Littlefinger. Now she has zero and has to marry Tyrion, and stay in King’s Landing for who knows how long. How things can change.

Has a quote ever captured Game of Thrones more than when the boy told Theon “If you think this has a happy ending, you haven’t been paying attention.”? I don’t think so.

Quote of the day comes from the Blackfish. Edmure said that the laws of gods and men do not allow a man to make another man marry someone he doesn’t want to. The Blackfish then says “the laws of my fists are about to compel your teeth”. I have little doubt the Blackfish would hold true to his threat if Edmure didn’t consent to the marriage.

“The Climb” sees many characters travelling from one place to another and we are reminded that in Game of Thrones, the journey is often times just as good as the destination.